After a third round of talks made little progress last week, the US/China trade war has escalated badly with tit for tat moves on an almost daily basis by each side. This has seen share markets fall sharply with US, global and Australian shares down about 5-6% from recent highs and safe haven assets like bonds and gold benefiting on the back of worries about the global growth outlook. This note looks at the key issues.

What is a trade war?

A trade war is where countries raise barriers to trade with each other usually motivated by a desire to “protect” jobs often overlaid with “national security” motivations. To be a “trade war”, the barriers need to be significant in terms of their size and the proportion of imports covered. The best-known global trade war was that in 1930 which saw average 20% tariff hikes on US imports.

What is so good about free trade?

A basic concept in economics is comparative advantage: that if Country A and B are both equally good at making Product X but Country B is best at making Product Y then they will be best off if A makes X and B makes Y. Put simply, free trade leads to higher living standards and lower prices whereas restrictions on trade lead to lower living standards and higher prices.

So why is President Trump raising tariffs then?

It’s basically about fulfilling a presidential campaign commitment to “protect” American workers from what he regards as unfair trading practices in countries that the US has a trade deficit with – notably China. And he knows this is popular with his supporters but there is also some degree of bi-partisan support for taking on China.

What does President Trump want?

Basically, he wants China to lower its tariffs, allow better access for US companies, end US companies being forced to hand over their technologies and protect intellectual property of US companies. At a high level he wants a reduction in America’s trade deficit with China. Along the way he has renegotiated the NAFTA free trade agreement with Mexico and Canada and the free trade deal with South Korea and is in talks with Europe and Japan. In recent times he has also used the threat of tariffs to get what he wants from countries (eg Mexico in relation to border protection).

Where are we now?

Fears of a global trade war kicked off in March last year with Trump’s announcement of a 10% tariff on aluminium imports and a 25% tariff on steel imports. US allies were subsequently exempted but China was not. On March 22 Trump announced 25% tariffs on $US50bn of US imports from China. These were implemented in July and August. After Chinese retaliation Trump announced a 10% tariff on another $US200bn of imports from China (implemented in September) which would increase to 25% on January 1 this year. The latter was delayed as the talks made progress.

However, following May 5 tweets by Trump, on May 10 the delayed tariff hike from 10% to 25% on $US200bn of imports from China was put in place and the US kicked off a process to tariff the remaining roughly $US300bn of imports from China at 25%. If fully implemented this would take the average US tariff rate on imports to around 7.5%, which is significant (albeit minor compared to the 20% 1930 tariff hikes). 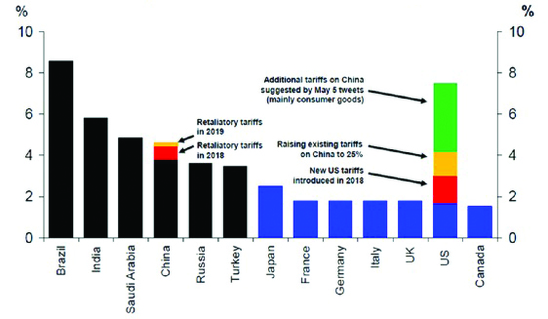 Along the way, China’s retaliation has been less than proportional, partly reflecting lower imports from the US. The US has also put in place restrictions on dealing with Chinese tech companies like Huawei.

Following a meeting in late June between Presidents Trump and Xi the trade war was put on hold pending a third round of talks. These look to have made little progress and Trump announced last week that from September 1 the remaining $US300bn of imports from China will be taxed at 10% and this may go beyond 25%.

China has responded by allowing the Renminbi to fall below 7 to the $US and reportedly ordering state owned enterprises to halt imports of agricultural products from the US. The US then named China a currency manipulator (even though basic economics pointed to a fall in the Renminbi in response to the tariffs on its good) which opens the door to possibly further action by the US (eg intervention to lower the $US versus the Renminbi) and potentially a further escalation in the trade war.

At the same time the US is still considering auto tariffs after a report lodged in February.

What happened to the US/China trade talks?

This has been the third round of trade talks that look to have failed. The timing of the announcement of the latest round of tariffs may also reflect a desire by Trump to force the Fed to ease more as he wasn’t happy with its 0.25% cut last week and to show that he is tougher on trade than far left Democrat presidential candidates Sanders and Warren. Whatever it is, there is likely to have been a further breakdown in trust between China and the US and China may have decided to wait till after the election.

Ongoing tensions around North Korea, Iran, Hong Kong, Taiwan and the South China sea are probably not helping the issue either.

What will be the economic impact?

The latest round of tariff increases from September 1 would be a big deal compared to last year’s tariffs and see the impact shift to largely consumer goods as opposed to intermediate goods in the first tariff rounds. The 10% tariff could knock around 0.3% from US and Chinese GDP particularly as investment gets hit in response to uncertainty about supply chains. The full 25% tariff could take that to around 0.75% with roughly a 0.2% boost to US core inflation (albeit this would be temporary and looked through by the Fed). This would flow on to slower global growth and lead to less demand for Australia’s exports even though we are not directly affected.

What is the most likely outcome?

At this point it’s hard to see a way out of the escalating trade war and it risks flowing into other issues as well including around HK, Taiwan and the South China sea as the US and China slip further towards some sort of “cold war”. However, as the economic impact in the US mounts – so far its just been impacting business confidence and investment plans but risks impacting consumer spending too – President Trump is likely to become more concerned. Recessions and rising unemployment have historically killed the re-election of sitting presidents (Hoover, Ford, Carter and Bush senior) and for this reason we remain of the view that a deal will be reached before the election. President Trump showed late last year that he was sensitive to the impact of the trade conflict on the US share market (as after sharp falls he called President Xi to set up a new meeting). So sharp share market falls may be needed again to get the US and China negotiating. But this means it could still get worse before it gets better – the US share market had a top to bottom fall last year of 20%!

It’s also worth noting that policy stimulus by the Fed and the Chinese government will offset some of negative impact which along with the absence of the sort of excesses (like in cyclical spending, inflation and private debt) that normally precede recessions in the US is why we are not predicting a recession.

What does it mean for investment markets?

Basically the uncertainty around the escalating trade war is bad for listed growth assets like shares as it threatens the outlook for growth and profits, but positive for safe haven assets which is why bond yields in many countries including Australia have pushed further into record low territory and gold has increased in value.

Following last week’s highs, global and Australian shares have fallen roughly 5-6%, mainly reflecting concern about the impact on growth from the escalating trade war. Further downside is likely in the short term as the trade war continues to escalate and we are also in a seasonally weak part of the year for shares. This is likely to be associated with further falls in bond yields.

However, providing we are right and recession is avoided, a major bear market in shares (ie where shares fall 20% and a year later are down another 20% or so) is unlikely.

What does it all mean for Australia?

Fortunately, Australians aren’t having to pay higher taxes on imports like Americans, but the main risk is that we are indirectly affected as the US/China trade war drags down global growth, weighing on demand for our exports and leading to unemployment pushing higher than our 5.5% forecast for year end. This all adds to the case for further easing by the RBA (we expect the cash rate to fall to 0.5% by February) and for further fiscal stimulus.

What should investors do?

Times like the present are stressful for investors. No one likes to see their wealth fall and uncertainty seems very high. I don’t have a perfect crystal ball, so from the point of sensible long-term investing the following points are worth bearing in mind. 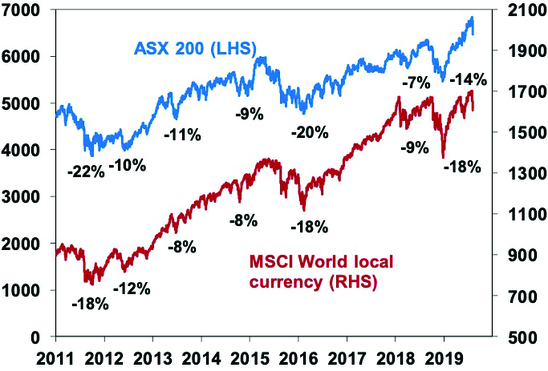 Important note: While every care has been taken in the preparation of this document, AMP Capital Investors Limited (ABN 59 001 777 591, AFSL 232497) and AMP Capital Funds Management Limited (ABN 15 159 557 721, AFSL 426455) make no representations or warranties as to the accuracy or completeness of any statement in it including, without limitation, any forecasts. Past performance is not a reliable indicator of future performance. This document has been prepared for the purpose of providing general information, without taking account of any particular investor’s objectives, financial situation or needs. An investor should, before making any investment decisions, consider the appropriateness of the information in this document, and seek professional advice, having regard to the investor’s objectives, financial situation and needs. This document is solely for the use of the party to whom it is provided.